After arriving in South Korea, North Korean Defectors must undergo an investigation by South Korea's National Intelligence Service to determine whether or not they are spies. This process takes between one and three months. Once NKDs are cleared by the NIS they are sent to Hanawon.

Hanawon, also known as the North Korean Resettlement Support Center, provides the first support that NKDs receive for their new lives in the South. NKDs go through a 12-week program at one of two Hanawon Centers (Anseong for women; Hwacheon for men) to support their initial resettlement in ROK.  At Hanawon NKDs receive career guidance and job training; mental and physical care; cultural lessons on South Korean society; and explanations of post-Hanawon services.

After leaving Hanawon, NKDs remain under residence protection/care by the government for five years. After which, they are considered as ordinary citizens. Most post-Hanawon services are provided within this five year period; however, even after these five years, NKDs can still access various business support, enterprise support, and agriculture resettlement support that are aimed to support long term resettlement.

Thanks to Hana Centers around the country, along with other governmental entities, NKDs are offered federal benefits in the forms of: basic grants, housing support, career support, education support, etc.

In addition to governmental assistance, many corporations, religious groups, charities, and other non-governmental groups have various kinds of support for North Koreans. While many work with or are subsidized by the government, their efforts could be singled out as a different category that influence the resettlement of the North Koreans at ROK. In many cases, these organizations are the direct interaction with the resettlers which make the difference in their lives. 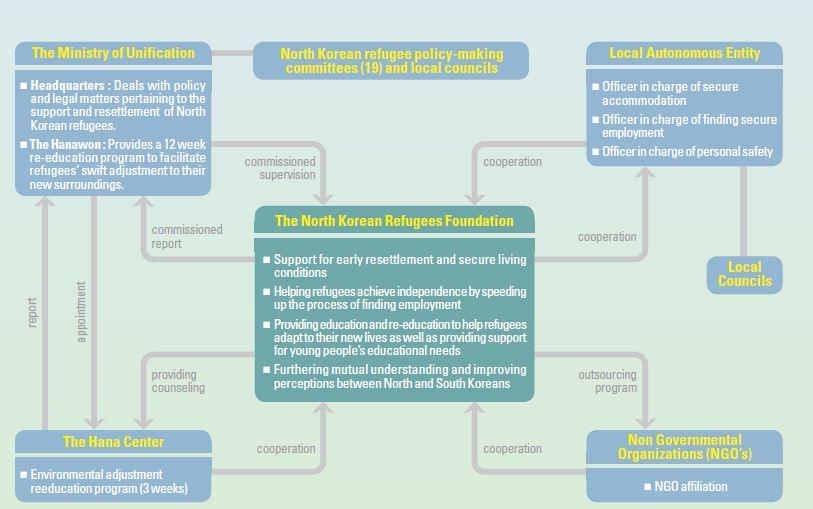